In Indiana, 2017 was a tale of two six-month periods. From June 2016 to December 2016, statewide farmland values increased from 1.9% to 2.9%. The much better than average yields of corn and soybeans received in the fall by many producers likely contributed to a brighter outlook. However, as the low prices resulting from an abundant supply resulted in continued low prices, the period of December 2016 to June 2017 saw the farmland land market lose strength and decline by 2.6% to 3.2%. The left statewide farmland values stable from June 16 to June 17.

When asked to forecast what was likely to happen to farmland values in the June 2017 to December 2017 period, the respondents were pessimistic. On average, a statewide decline 2.2% to 3.0 in farmland values is expected. 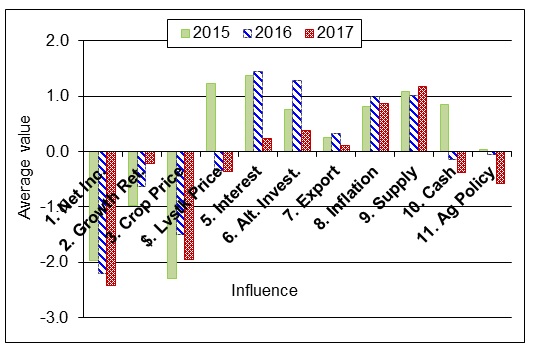 Respondents used a scale from -5 to +5 to indicate the effect of each item on farmland values. A negative influence is given a value from -1 to -5, with a -5 representing the strongest negative influence. A positive influence was indicated by assigning a value between 1 and 5 to the item, with 5 representing the strongest. An average for each item was calculated. In order to provide a perspective on changes in these influences across time, Figure 1 presents data from 2015, 2016, and 2017. The horizontal axis indicates the item from the list above.

Given the low grain prices and net farm income, it is not surprising respondents placed a negative influence on net farm income, expected growth in returns, crop prices, and livestock prices. Respondents have become more negative about net income over the three years.

The positive influence of interest rates, alternative investments, and exports declined in 2017. Increasing long-term interest rates, expected for several years, now seem to be occurring as the Federal Reserve makes changes to their low interest rate policy. The supply of farmland on the market and expectations about inflation are the strongest positive influences on the 2017 farmland market. Of these 11 influencers of land values, respondents lowered their scores for eight of them this year. One stayed constant, and only two rose.

Margins in Midwest crop production remain tight. In the short term, a boost in commodity prices does not seem likely. Producers continue to focus on lowering per unit production costs. This creates pressure to hold the line or reduce cash rent. In addition, respondents perceive the cash position of farmland buyers has sharply declined. As a result of these and other market factors, the downward adjustment in the value of farmland and cash rent is expect to continue over the next year. For 2018, a decline 3% to 6% in farmland values and 3% to 5% in cash rent is expected.